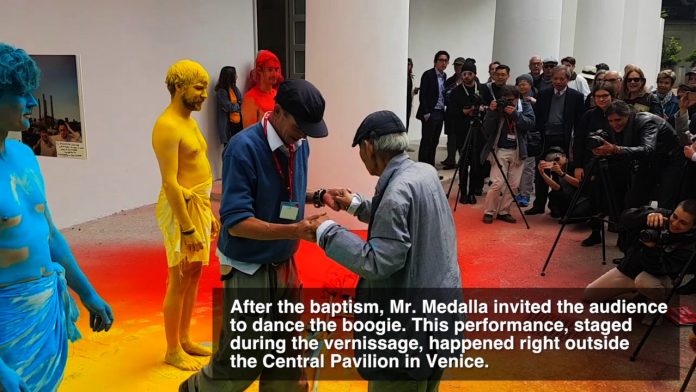 FILIPINO pioneering international artist David Medalla, whose works have been shown or installed in art capitals London, New York, Paris, Madrid, and Munich, died on Dec. 28. He was 78 years old. His death was announced by Mr. Medalla’s partner and curator Adam Nankervis, who said in a Facebook post, “David has left us to enter the dream. Dave passed away gently in his sleep in Manila today.”

Born in Manila in the middle of the Second World War on March 23, 1942, Mr. Medalla, who was admitted to Columbia as a teen, co-founded the important gallery, Signals, in London in the 1960s. The space was one of the places where the field of kinetic art flourished, making him a pioneer of that style. The artist also made various works in painting and performance art, and was one of the pioneers of installation art. One of his most famous works is Cloud Canyons No. 31, which, while it was conceptualized during that London period in 1964, was executed in 2016. It was exhibited at the 14th Biennale de Lyon, and was shortlisted for the first Hepworth Prize for Sculpture in 2016. That work was made of Plexiglas tubes, wood, and fiberglass; all working together with oxygenators to emit soap bubbles.

While that iteration of Cloud Canyon is now in the lobby of BDO Unibank, Inc., other Cloud Canyon works have either been seen or are installed at the Tate Modern, the Singapore National Gallery, the Museo Nacional Centro de Arte Reina Sofia in Madrid, and The City Art Gallery in Auckland.

Mr. Medalla had been ill for quite some time, as a result of two strokes. Mr. Nankervis told BusinessWorld in 2019 (https://www.bworldonline.com/blowing-bubbles/), “Speaking is difficult for him now.” Still, this did not stop him from working. “He’s still painting, he still becomes extremely focused, even obsessed with work,” Mr. Nankervis said.

Critic and curator Carlos Quijon, Jr. told BusinessWorld in a message, “Medalla was a pioneer. Not only of kinetic art, but more so of a sensibility about art that embraces its vulnerabilities — be it to time, process, participation, climate, even. Because Medalla’s works allow themselves to be affected by all these things, they are rendered sensitive, alive. Medalla’s idea of ‘cosmic propulsions’ is a faith in the cosmos, faith in art, in the agency that inheres in it.”

As Mr. Nankervis said in the Facebook post announcing Mr. Medalla’s passing, “His spirit has transcended and moved so many artists, friends, strangers and the art loving public over time and space, inspired by his genius as an artist, poet, activist, wit, philosopher and raconteur. His curiosity, joy, his immense curiosity, his alchemical spirit knew no bounds.” — Joseph L. Garcia

by Robin MILLARD Agence France Presse GENEVA, Switzerland (AFP) — Pfizer announced Friday that it will provide up to 40 million of its Covid-19...
Read more