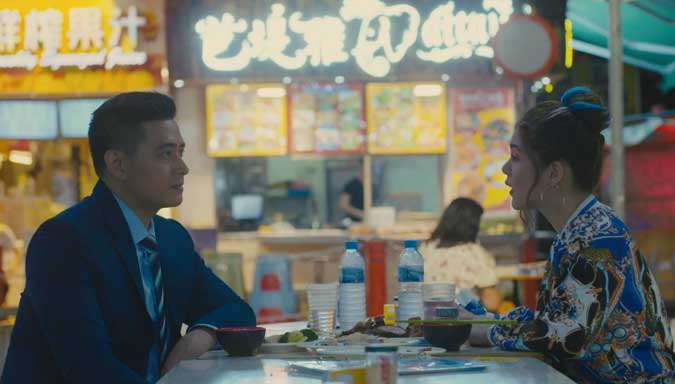 ALFRED Vargas had been a fine actor in his youth, and proves to be a fine producer for his film, Tagpuan. As for his acting, the Quezon City politician might benefit from returning to the ring more often.

Mr. Vargas plays the film’s lead, Allan, batting his bets in a multilayered nonlinear plot (written by Ricky Lee, no less). It’s beautifully shot in Manila, Hong Kong, and New York; it’s thematically sound in its visuals, and the soundtrack isn’t bad either.

Allan is a wooden, stoic businessman who has the misfortune of falling in love with unconventional women. His first partner is Agnes (played by Iza Calzado). Flashbacks tell of a troubled marriage in upper middle-class Manila, where Agnes plays the role of a perfect wife dressed in several shades of pink, and various items of conservative jewelry: either a string of pearls, or her diamond eternity wedding band. In a time jump where they meet again in New York, she’s dressed significantly less glamorously; but comfortably, in a palette of blues. She now sports hoop earrings, and hops from one relationship to another, all while juggling a career in literature and the arts, a dream she had to postpone to be a perfect wife and mother.

I might say the hoop earrings can be a bit on the nose when implying a woman’s loose morals. In the period between meeting his ex-wife in New York, he meets a Manic Pixie Dream Girl named Tanya (a trope that has seen its day in Western media; she’s still a novelty over on these shores) played by Shaina Magdayao (in a departure from her usual good-girl roles). Yes, she’s also in hoop earrings. She reminds one of Clementine from Eternal Sunshine of a Spotless Mind — down to the orange outerwear and outre hair. She does switch up to blue (hair and outfit) in a bit. The costumes are visual markers for which timeline and country we’re currently exploring.

Poor Mr. Vargas has to act stony due to his character’s personality, but one can be stony and still have a spark of life left in those eyes. It’s understandable when he gets chewed up by Ms. Magdayao, whose initial appearances appear as if they’re meant for slapstick, but as we go through the plot, we realize that the hamminess in her first scenes were surprisingly integral to the plot. (Ms. Magdayao bagged the MMFF Best Supporting Actress award on Sunday.) What’s sad is seeing him not being able to catch up to Ms. Calzado, who plays her role with her usual subtlety. If one can’t show a pulse next to someone considerably more sedate, there’s not much to go on with. While Mr. Vargas helms the film in more ways than one, it’s certainly the women in the production who carry the film and hold its interest.

The plot can be confusing (but that is definitely a deficiency on my part). The story takes place over several timelines: the initial failed marriage in Manila, the various sojourns with Hong Kong-native Tanya, and his reunions with the two women, both in New York. A flaw in Philippine films sometimes is to show exotic locales through the eyes of a tourist, but this one treats its locations matter-of-factly, wisely placing the story front and center. Nevertheless, the director’s eye has a certain gift in capturing appealing grit: whether it’s Hong Kong tenements or NY Chinatown slums. The nonlinear plot is also integral, and is beyond a stylistic choice. It was, I think, the only way to show relationships in their various stages without following a formula: there’s the initial spark (Tanya’s scenes with Allan in Hong Kong), various stages of decline, but also an oft-ignored reality: the silences that follow eventful relationships. The nonlinear plot also allows for better illustrations of the changes within people — we’ve noted this in Iza Calzado’s costume changes, but it takes a more significant turn in showing the personal decline of Tanya (she’s shown to be a liar with a heart; she simply can’t catch a break!). Finally, the nonlinearity gives room for societal issues: the film thus becomes more than a romantic drama, but a story about diaspora (Filipino and otherwise). It mentions the harsh realities of being an immigrant in Trump’s America, the plight of low-paid workers in Hong Kong (even the region’s unrest), inequality, class, social pressure, sex work, women, family, feminist intersectionality and a whole lot more — all handled with sensitivity and not piercing into the carefully pieced story (this must be the handiwork of Mr. Lee).

While I understand the choices that made the film so — the lead actor also being its producer, after all — it’s that one choice that makes the film less than the sum of its parts. For example, the film would have had a completely different tone had the narrator been either one of the women. Barring that, a more sensitive actor would have been able to play off the strengths of the two female leads. It’s ironic that the choices that created the film are the same ones holding it back from being close to perfect as it could have been.

Because of the coronavirus disease 2019 (COVID-19) pandemic, the Metro Manila Film Festival is being held online, with the entries screening via Upstream.ph. The festival is ongoing until Jan. 7.

MAPUTO, Mozambique (AFP) — A tropical cyclone that hit central Mozambique on the weekend has displaced thousands of people and caused severe flooding in...
Read more
NEWS

Malacañang has taken exception to a law that China passed giving its coast guard authority to fire on foreign vessels in waters that it...
Read more

BusinessWorld - January 25, 2021 0
MAPUTO, Mozambique (AFP) — A tropical cyclone that hit central Mozambique on the weekend has displaced thousands of people and caused severe flooding in...