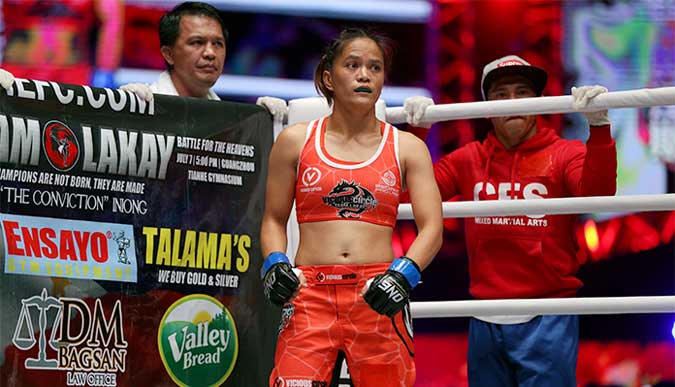 HAVING reconsidered initial thoughts of retiring from mixed martial arts, Gina “Conviction” Iniong said she is now more determined and driven, and is looking forward to plunging back into action in ONE Championship.

Ms. Iniong (9-4), who recently gave birth to her first child, last saw action in ONE in January this year, beating Asha Roka of India by unanimous decision. Prior to it, she represented the Philippines in the 2019 Southeast Asian Games, winning gold in kickboxing.

Then she learned that she was in the family way with husband Richard Araos just as the coronavirus pandemic halted sporting activities, including those of ONE.

While away from the game, Team Lakay’s Iniong thought of retiring altogether to focus on building a family and taking care of daughter Gianna Rose.

But her coach, Mark Sangiao, convinced her to postpone such a decision until she had given birth so she could think it through better.

And after some thought, Ms. Iniong did reconsider her retirement plans and is now looking at her career with added perspective and motivation.

“This year, everything just fell into place for me, and I learned a lot of valuable lessons. The biggest lesson I learned this year is that time is so precious. You can’t put a price on it. It’s the only thing you can never make more of. It’s life’s most expensive commodity,” she said in a statement.

Adding, “[As for my career] I want to be the best Gina Iniong in the Circle possible. I can’t wait to get back in the Circle. I’ve missed it. Once I’m cleared to go back to training, and when my body feels right, you can expect to see me alongside your favorite Team Lakay superheroes again.”

In the ONE atomweight division, Ms. Iniong is one of the contenders for the title currently held by Angela Lee of Singapore, who incidentally is also pregnant with her first child. But with her being inactive for now, she fell outside of the top five.

But the Filipina fighter is not discouraged by it and vowed to put in the needed work to get back in the mix.

“My division is really exciting right now. There are so many great talents and I’m so excited for a lot of potential matchups. Any opponent that ONE Championship will give me, I’ll be ready,” she said.

“I’m hungry and motivated to reestablish myself at the top. Fans can expect a stronger, wiser, and more dangerous Gina Iniong next year.”

SEASON WRAPPED UP
Meanwhile, ONE Championship wrapped up its coronavirus pandemic-hit season on Dec. 25 with “ONE: Collision Course II” with Jamal Yusupov of Russia beating Samy Sana of France by unanimous decision in their headlining ONE featherweight muay thai battle.

The pre-recorded event capped what was a challenging year for Asia’s biggest sports media property that saw it temporarily suspending activities in March because of the pandemic before resuming with a reconfigured setting to adapt with the prevailing conditions in June.

By Kyle Aristophere T. Atienza and Charmaine A. Tadalan, Reporter THE PHILIPPINES will get as many as 40 million doses of free coronavirus vaccines this quarter...
Read more
NEWS

Ateneo economists: With no progress vs COVID-19, PH economy could grow only 2.9 percent this year

MANILA, Philippines---If current COVID-19 quarantine restrictions drag on until end of 2021 and mass vaccination lags behind, the Philippine economy cold eke out only...
Read more
NEWS

BusinessWorld - January 21, 2021 0
By Kyle Aristophere T. Atienza and Charmaine A. Tadalan, Reporter THE PHILIPPINES will get as many as 40 million doses of free coronavirus vaccines this quarter...

Ateneo economists: With no progress vs COVID-19, PH economy could grow...

Ateneo economists: With no progress vs COVID-19, PH economy could grow...