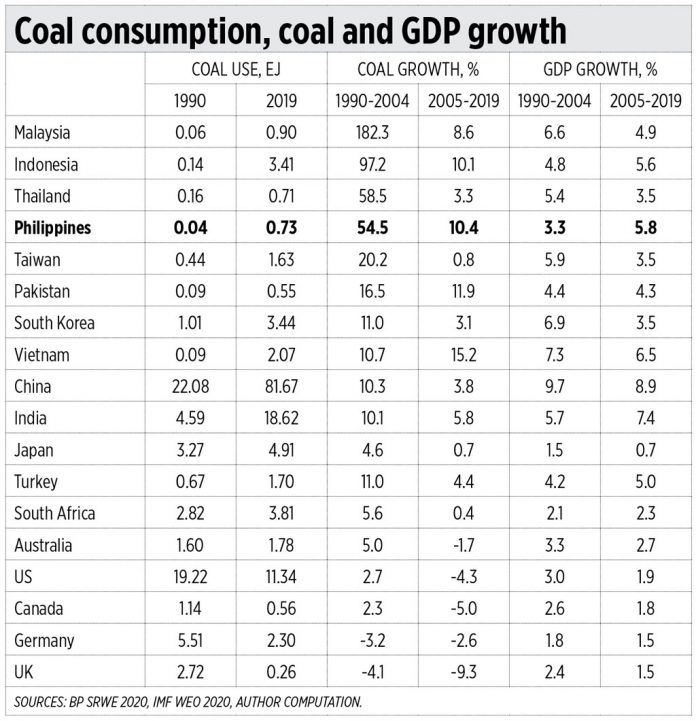 As of Nov. 18, 39 countries around the world have reported their third quarter (Q3) GDP 2020 and only the Philippines has had a double-digit contraction at -11.5%. The Q1-Q3 average is -9.7%, with Malaysia’s -6.4%, Indonesia’s -1.9%, Vietnam’s +2.2%. The Philippine government, in particular the Department of Health, Inter-Agency Task Force for the Management of Emerging Infectious Diseases and their consultants, should realize that their strict and indefinite lockdown policy is the main reason for this crippling of business.

Energy policies will greatly help or further cripple economic recovery. And last month the Department of Energy (DoE) issued a moratorium, a stoppage of greenfield new coal power plants. Only those coal plants under committed projects and indicative projects which have secured some financing can proceed.

There are two inconvenient truths that the recent DoE order does not recognize.

One, the Philippines’ coal consumption is among the lowest in the emerging and developed economies, only 0.73 Exajoule (EJ) or 17.42 million tons oil equivalent (MTOE) in 2019 (conversion factor is 1 EJ =23.88 MTOE).

Two, cheap energy from fossil fuels, especially coal, is among the most important factors why many countries have developed and industrialized. Countries that expanded their coal use over the last 30 years showed faster growth and countries that reduced and shrank their coal use experienced slower growth. The data in the table is from the IMF World Economic Outlook (WEO) database October 2020, and the BP Statistical Review of World Energy (BP SRWE) database June 2020. I computed the yearly growth from BP SRWE then I took the averages in two groups of 15 years, 1990-2004 and 2005-2019.

The UN Framework Convention on Climate Change’s annual big meeting is coming soon and various climate alarms are being sounded because the various multilateral and national climate agencies desperately need that $100 billion a year of climate money starting 2020 as promised by the rich countries in the Paris Agreement 2015.

So no rain for months, no flood, no storm are proof of “man-made” global warming and climate change. And lots of rains, lots of flood, lots of storms like Goni (local name: Rolly) and Vamco (local name: Ulysses) are also proof of “man-made” global warming and climate change. Whatever weather event, whatever climate, we should send more money to the UN, the various climate and environment agencies. This is similar to gambling in flipping a coin and declaring “heads I win, tails you lose.”

We should prepare for the rising rivers, creeks, and lakes that are happening yearly, not a rising ocean. Rising rivers are actual while a rising ocean is fictional, a product of computer models based on unrealistic assumptions.

Dr. Renato Solidum, Jr., Phivolcs director, already made a simple proposal many years ago that the main solution to regular, annual flooding of Metro Manila, Central Luzon, Cagayan Valley, other areas is massive regular dredging of rivers, creeks and lakes. Costly but practical.

In the Central Luzon provinces, geological estimates show that lahar and sand from the Pinatubo eruption will continue to go down with flood waters for the next 30 years or more and hence, they will continue to cause more siltation and shallow rivers.

But the government and Congress would rather spend big on climate agencies, climate junkets, and climate consultants, wasteful use of taxpayers money.

There are three ways to reduce the cost of dredging and dams construction via more involvement of private businesses.

One, invite real estate developers to participate in regular, large-scale dredging of rivers — they get the sand, mud, and other solid materials in river beds for their land reclamation projects in the sea.

Three, allow more open pit mining and, once mined out, leave these pits as man-made lakes to help store flood water. An open pit mine that became a lake that is now a tourist attraction in Toledo, Cebu.

FINANCE Secretary Carlos Dominguez 3rd has asked the Department of Trade and Industry (DTI) to return to the Bureau of the Treasury (BTr) the...
Read more
NEWS

THE year of 2020 will be remembered as one of the most devastating and deadliest years in the modern history and as its end...
Read more
NEWS

S&P Global Ratings maintained that the Philippine economy is likely to contract by 9.9 percent this year before recuperating in 2021. In a report released...
Read more

- November 30, 2020 0
THE year of 2020 will be remembered as one of the most devastating and deadliest years in the modern history and as its end...