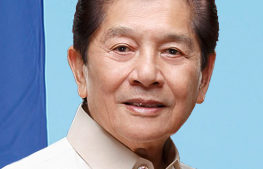 CEBU CITY —- Cebuano leaders mourned the death of Rep. Raul Del Mar of Cebu City’s south district, praising his service and contribution to the growth of Cebu.
Cebu Gov. Gwen Garcia said Del Mar is “well respected and loved.” She admitted that she was caught by surprise with the news since there were no reports that the congressman was sick.
Garcia said she remembered Del Mar as very conscientious with his duty and without any absent marks in Congress. He also arrived on time and never left the halls of the Congress until adjournment.
“We have lost a great Cebuano,” she said.
Former Cebu City mayor Tomas Osmea, a close friend and political ally of Del Mar, said the congressman spon…