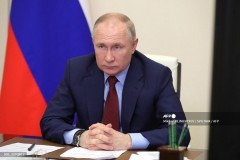 Britain on Friday sanctioned 12 members of Russian President Vladimir Putin’s “inner circle” including his reputed girlfriend, accusing them of hiding tens of billions of dollars on his behalf. The list included Putin’s ex-wife Lyudmila Ocheretnaya and Alina Kabaeva, a former Olympic gymnast whom UK officials described as his “current partner”, as well as Kabaeva’s grandmother Anna Zatseplina. The European Union has proposed sanctioning Kabaeva, according to a document seen last week by AFP. She is said […]