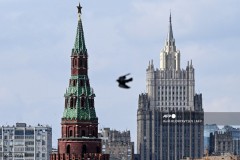 Moscow on Friday advised its citizens against travel to the United Kingdom, citing London’s “unfriendly” stance as well as huge delays in visas for Russians. “In order to avoid financial losses and other possible problems, we recommend that Russian citizens refrain, if possible, from travelling to the UK and trying to obtain British visas,” the Russian foreign ministry said. It added that it will “act in the same way” with British citizens until the situation […]