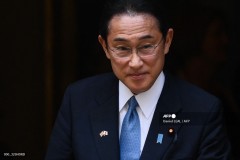 Australian Prime Minister Scott Morrison and Japanese Prime Minister Fumio Kishida on Friday congratulated Ferdinand Marcos Jr. on his presumptive win in the presidential election. In a tweet, Morrison said he hopes the two nations’ relations would continue to flourish under the new Philippine leadership. I congratulate Ferdinand Marcos Jr @bongbongmarcos on being elected President of the Philippines at the national elections on 9 May. Following the 75th anniversary of Australia-Philippines relations last year, we look […]