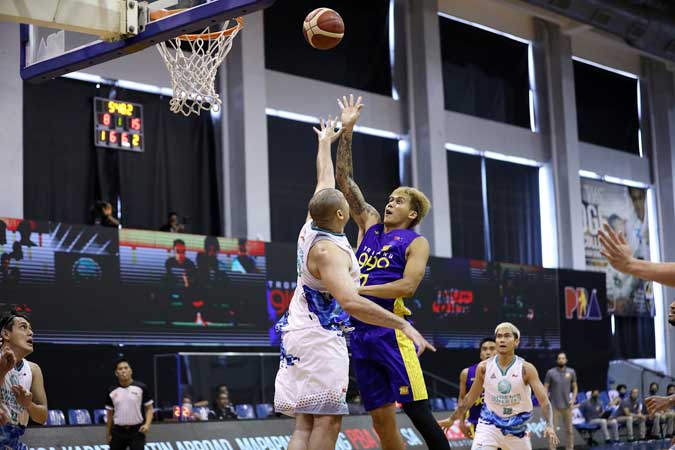 COMPETITION in the PBA Philippine Cup is now down to four teams with the TNT Tropang Giga and Phoenix Super LPG Fuel Masters kicking off the semifinal proceedings on Wednesday.

Set for 3:45 p.m. at the Angeles University Foundation Arena in Pampanga, the Tropang Giga and Fuel Masters, the third and second seeds, respectively, following elimination play look to draw first blood in their best-of-five semifinal joust and move a step closer to the Philippine Basketball Association (PBA) All-Filipino title.

The other semifinal pairing has the Barangay Ginebra San Miguel Kings going up against the Meralco Bolts. They play their series opener also Wednesday at 6:30 p.m.

TNT finished the elimination round with a 7-4 record, joint third place with four other teams.

But on the strength of a higher quotient it took third spot to earn a twice-to-beat advantage in the quarterfinals against the sixth-seeded Alaska Aces.

The team though saw no need to make use of the incentive as it went on  to eliminate Alaska at the first instance, 104-93, on Saturday.

The Tropang Giga used a strong third-quarter push to create a wide separation from the Aces, which the latter could not make up for the rest of the way en route to the defeat.

Roger Pogoy came up big for TNT in the win, finishing with 34 points, 16 coming in their key third-quarter assault, to go along with eight rebounds, four assists and three steals in 35 minutes on the floor.

Ray Parks Jr. backstopped him with 20 points while Troy Rosario had 10 points and Poy Erram nine points and 11 rebounds.

“We’ll be ready for the semifinals,” said TNT coach Bong Ravena, who also underscored that defense has to be there for them if they want to go deeper further in the competition.

As a team, TNT is looking to win its first Philippine Cup title since the 2012-13 season.

PHOENIX
Phoenix, on the other hand, wound up in a tie for first place with Barangay Ginebra at 8-3, but it had to surrender the top spot as the team lost in its lone game in the eliminations against the Kings.

Despite that, the Fuel Masters proved their mettle in their quarterfinal battle with the Magnolia Hotshots Pambansang Manok, making short work of the latter by winning, 89-88, on Saturday and finding no use for its twice-to-beat advantage.

Matthew Wright towed Phoenix to the victory, finishing with 32 points, including a clutch three-point basket with nine seconds remaining that pushed them ahead to book the win. He also had nine assists.

Jason Perkins was the other Fuel Master in double-digit scoring with 16 points.

Having booked their spot in the Final Four, Phoenix coach Topex Robinson expressed excitement and said they are looking forward to the challenge.

“It’s just so magical for us and we’re just so blessed to be here,” said Mr. Robinson, who was initially named an interim coach heading into the conference in place of Louie Alas before being elevated to full-time head coach.

Phoenix met TNT once in the elimination round and bowed, 110-91, but at that time, it still did not have do-it-all forward Calvin Abueva, who has been a game-changer for the team since returning from a 16-month league-imposed suspension.