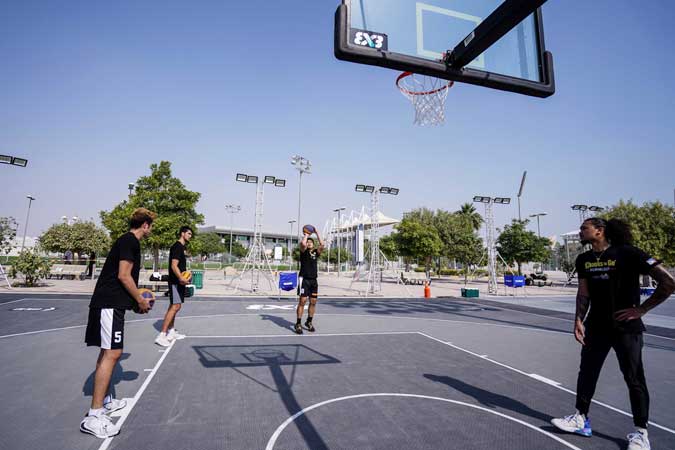 THE grind for Manila Chooks TM at the 2020 International Basketball Federation (FIBA) 3X3 Doha World Tour Masters begins on Friday in Qatar with the team looking to go deep in the tournament amid tough competition.

The team from the Philippines, composed of top 3×3 players Joshua Munzon, Alvin Pasaol, Troy Rike, and Santi Santillan, opens its campaign in Pool A where it is lumped with world number one team Liman and home squad Lusail.

While recognizing that it is going to be a challenge for the team at the onset, Manila Chooks TM said it is up to the task at hand and vowed to do everything they can to bring pride not only for the team but also to the country.

“It’s definitely going to be a test for us to square against those European teams, but you know, I think we’re ready mentally, physically,” said Mr. Munzon, the country’s number one-ranked 3×3 player.

“I think we’re ready as we can be and we’ll see how things go. I am confident with my team. We’re ready to get after it,” he added.

The team is coming off a successful run in the Chooks-to-Go 3×3 Pilipinas tournament where it emerged as the biggest winner and champion while playing as the Family Brand’s Sardines-Zamboanga City squad.

That experience should serve the team in good stead in the Doha World Tour Masters, said Mr. Rike.

“We have played more recently than probably most of the other teams here. We’re kinda still in game mode and team mode heading right into that,” said the former National University player.

The team left for Doha early this week and has been able to squeeze in practice time in the lead-up.

“Practice has been doing well and we’re able to execute what we want to do. By Friday, we’ll be ready,” said Mr. Pasaol.

First for Manila Chooks TM is a showdown with Liman at 11:55 p.m. (Manila time). Liman is led by 2017 FIBA 3X3 World Tour most valuable player Stefan Stojacic, world no. 3 Stefan Kojic, no. 4 Mihailo Vasic, and no. 6 Aleksandar Ratkov.

If Manila Chooks TM manages to land in the top two in its pool, it advances to the crossover knockout quarterfinal round where it will be pitted against those who advance from Pool C, which is composed of world number four team New York Harlem, no. 14 Lausanne of Switzerland, and Lithuania’s Utena.

Also up for grabs in the tournament are spots at next month’s World Tour Final in Jeddah, Saudi Arabia. — Michael Angelo S. Murillo