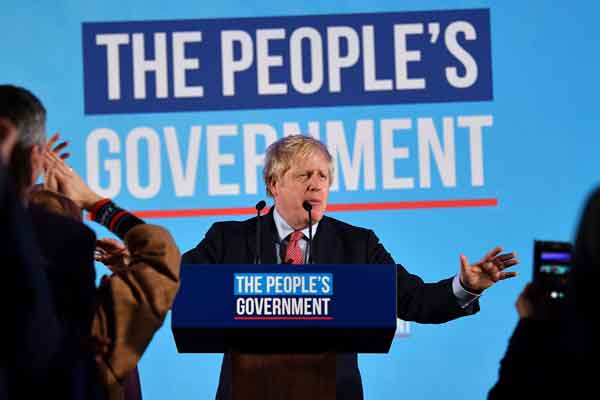 LONDON: British Prime Minister Boris Johnson went into isolation after a contact tested positive for the coronavirus, as a stay-at-home advisory came into effect for the United States’ third-biggest city on Monday.

Global infections have soared past 54 million with more than 1.3 million deaths, and the worrying spikes have forced governments to reimpose deeply unpopular and economically devastating restrictions on movement and gatherings.

Europe has been hit particularly hard by a second wave of the pandemic, with curbs reimposed — often in the face of protests — from Greece to Britain, where PM and coronavirus disease 2019 (Covid-19) survivor Johnson went into self-isolation after coming into contact with a Member of Parliament who later tested positive for the virus.

“He will carry on working from Downing Street,” a spokesman said, adding that the prime minister, who spent three nights in intensive care during his April bout of Covid-19, did not have any symptoms.

Elsewhere on the continent, Germany warned that its anti-virus measures were likely to stay in place for several months.

In hard-hit France, health minister Olivier Veran warned that while strict containment measures had helped slow the virus, “we have not won against the virus yet.”

Concerns of a resurgence also remain in parts of the world that have largely brought their caseloads under control, such as in Australia, where a new cluster suddenly emerged in a city that had gone seven months without a major outbreak.

And in Hong Kong, the government further tightened restrictions from Monday on the number of people in bars and restaurants, to guard against a spike.

US reeling from surge

The United States, the worst-hit nation in the world, surpassed 11 million cases on Sunday, adding one million new infections in less than a week.

The staggering spikes have forced cities and states across the vast nation to implement new curbs to try and stop the spread of the disease, with a stay-at-home advisory coming into force on Monday in Chicago — the third-biggest US city.

New York City, the epicenter of the spring outbreak in the US, is also rushing to fend off a second wave with new restrictions on bars and restaurants.

President Donald Trump, already under fire for his pandemic response, has been blamed for further complicating efforts by refusing to concede and cooperate with Joe Biden’s transition team, denying the President-elect vital briefings by outgoing officials.

They are not even allowed to consult with the top government immunologist Anthony Fauci.

“Of course, it would be better” if such talks could begin, Fauci told CNN on Sunday, noting that the virus could kill tens of thousands more Americans by the time Biden takes office on January 20.

‘This winter will be hard’

Hopes for an end to the pandemic were boosted by trial results of a vaccine candidate by pharma giant Pfizer and its German partner BioNTech, which showed it was 90 percent effective.

Ugur Sahin, BioNTech’s co-founder, told the BBC he was confident of a return to normal life next winter if uptake of the vaccine is strong.

“This winter will be hard” without any major impact from vaccinations, he predicted. But combined with a number of firms working to increase supply, “we could have a normal winter next (year).”

But Pfizer and BioNTech’s vaccine needs to be stored at -70 degrees Celsius (-94 Fahrenheit), presenting a huge storage and distribution challenge even for the richest countries in the world.

Their rival Sanofi’s vaccine, however, will not need such extreme temperatures, the French drugmaker’s chief Olivier Bogillot said Sunday.

“Our vaccine will be like the ‘flu vaccine,” he told CNews. “You can keep it in your refrigerator.”

Sanofi’s vaccine candidate could begin Phase 3 trials soon, he added. Eleven candidates are already at that stage, and Bogillot said “one laboratory is not going to be able to supply the doses for the whole planet.”

“We will need to have several winners at the end of this race.”