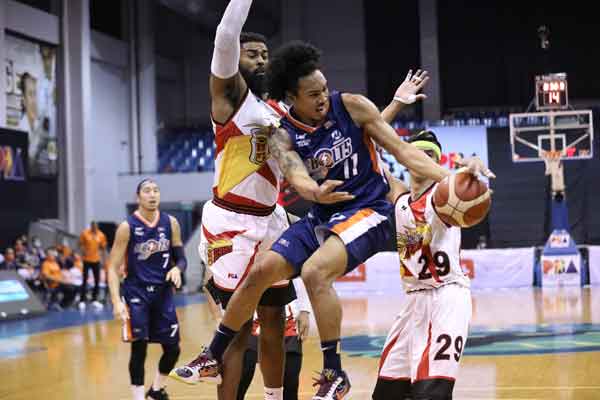 MERALCO ended the five-year reign of San Miguel as the Bolts demolished the Beermen, 90-68, in Game 2 of the quarterfinals of the PBA Season 45 Philippine Cup at the Angeles University Foundation Sports and Cultural Center in Pampanga.

The Bolts threaded the needle as it needed to win two games to clinch the coveted semis slot. The team did just that and became only the 16th squad in the league’s history to overcome a twice-to-beat disadvantage.

With the win, Meralco is set to duel in a best-of-five semifinals series against archrival Barangay Ginebra Gin Kings, the same team that has beaten Coach Norman Black and the Bolts in three of the last four Governors Cup championships.

Cliff Hodge tallied 14 on an efficient 7-for-9 shooting clip on top of six rebounds and three dimes while Baser Amer also had 14 points, seven boards and three assists to lead Meralco.

Black will have his first Final Four appearance in the Philippine Cup, formerly known as the All-Filipino.

“Tonight was really a focus on defense,” said Black. “We knew what we wanted to do defensively. We knew that they were a team that posted up a majority of the time. So, we tried to devise schemes that would try to slow down their post-up [threat], Mo Tautuaa and their guards.”

“It worked very, very well because the players executed the game plan. So, all hats off to them. All the credit goes to the players. I’m [extremely] happy for them. They worked [very] hard,” he added.

Meralco blew the game wide open in the third period as it staged a decisive 32-19 run to gain full control with a 75-50 edge, heading into the final frame. The Bolts kept the Beermen at bay in the final period and went on to dethrone the Beermen.

Tautuaa did get a double-double of 20 points and 11 rebounds and Lassiter also wound up with 20, but the rest of the Beermen played below par.

The Bolts beat the Beermen, 78-71, last Friday to extend the series to a sudden-death match.

The Beermen have been hounded by injuries this season. Multi-Most Valuable Player awardee June Mar Fajardo was unable to play due to shin injury, and former scoring champion Terrence Romeo injured his shoulder within just two games, going into the PBA “bubble.” Alex Cabagnot was also unable to play for the Beermen in Game 1 due to a strained hamstring.

The semifinals start on Wednesday with the TNT Tropang Giga facing the Phoenix Super LPG Fuel Masters at 3:45 p.m., followed by the Bolts and Ginebra in the main game at 6:45 p.m.

(With this series, Lifestyle seeks to shed light on the history, meaning and legacy of the country's many cultural treasures) One of the best-known paintings...
Read more
NEWS

Handel's "Messiah," one of the most iconic oratorios in classical music, will be performed virtually Dec. 19 at 7 p.m. on Facebook. It is...
Read more
NEWS

It's been around for generations, an easy and inexpensive home remedy to alleviate the discomforts of a clogged nose, nasal allergies, a bad cough,...
Read more