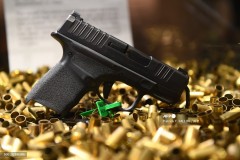 A two-year-old boy accidentally shot and killed his father in Florida after his parents left a loaded gun unattended, local authorities said Monday. When police officers, alerted by a 911 call, arrived at the victim’s home near Orlando on May 26, they found the child’s mother Marie Ayala providing CPR to her husband, Reggie Mabry. Law enforcement initially believed the 26-year-old, who died shortly afterward in hospital, had shot himself, but the eldest of the […]