ToonMe is making waves on Twitter — how wary should we be? 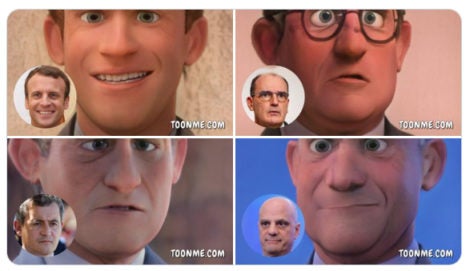 It’s without a doubt the application of the moment on Twitter. A big hit on the social network, ToonMe can make us look like we’re characters from a Pixar movie. On the platform, regular web users and celebrities alike are having a laugh as they post photos of themselves, seemingly unconcerned about sharing their personal data, which is a very real issue.

Having your own Pixar or Disney-style avatar is now possible, but it doesn’t come totally free. On Twitter, users have been having a blast playing around with ToonMe, an application that’s been all the rage in recent days, making it one of the most downloaded apps on the App Store and Play Store.

With just a few clicks and a photo, the application lets you turn yourself into a character from animated movies. The keyword “Pixar” even appeared in the top related tweets though the studio is not at all involved with this new trending application.

While Twitter users shared their own photographs, some had fun seeing what this transformation would look like with politicians, actors and singers and other celebrities.

Photos stored for up to two weeks

Internet users are succumbing to this new social network trend, much as they previously did with the FaceApp application, which allows them to age themselves 60 years. Just like that automatic image-editing application developed in Russia, ToonMe offers a free version with advertising. The “pro” version costs $4.99 per month (about P240).

However, while this application may appear safe at first glance, users should still pay attention to the privacy policy. ToonMe may indeed collect certain personal data from the user, as is the case on Facebook in particular.

Name, e-mail address and “social network information” may be retained. ToonMe notes that “For non-registered users and users who don’t share their results within the Services, the original photos and results are automatically removed from our servers by two weeks after the last interaction,” while registered users must request the removal of their images from the support team or delete them themselves.

The application, also accessible via its site, also indicates that it uses “special face recognition technologies,” which, in the event of hacking, could be dangerous for internet users who have used their own photograph.

The success of the application has encouraged “clones” or copycats, prompting ToonMe to post an alert on its site: “These fake ‘ToonMe’ apps resemble not just our name but even our icon as well.” One more reason to use any such application with caution. JB

Is your company a growth champion? Stand up and be recognized!

‘No plan, no Q, nothing’: QAnon followers reel as Biden inaugurated

Don’t miss out on the latest news and information.


Is your company a growth champion? Stand up and be recognized!


‘No plan, no Q, nothing’: QAnon followers reel as Biden inaugurated

ALGIERS --- Hundreds of women marched Monday in the Algerian capital to protest against a family code many consider demeaning, as they marked International...
Read more
NEWS

- March 9, 2021 0
ALGIERS --- Hundreds of women marched Monday in the Algerian capital to protest against a family code many consider demeaning, as they marked International...

From the White House to the dog house: Biden’s pooches sent...