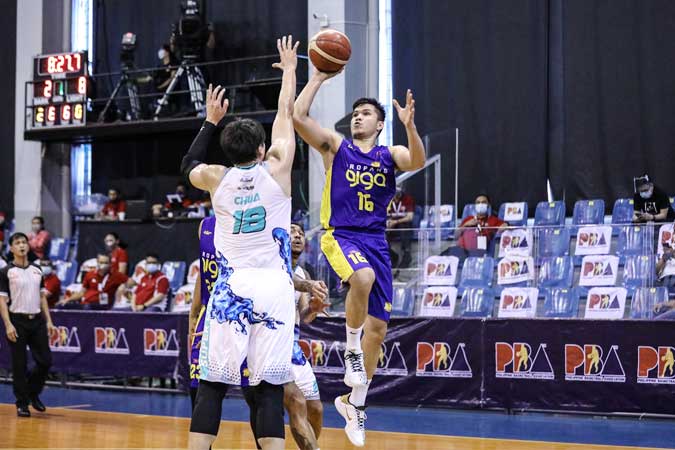 THE TNT Tropang Giga took an early lead in their best-of-five PBA Philippine Cup semifinal affair with the Phoenix Super LPG Fuel Masters after winning the series-opener, 95-92, on Wednesday at the Angeles University Foundation Arena in Pampanga.

TNT bucked a slow start before riding the late heroics of veteran Jayson Castro to get their semifinal push in the Philippine Basketball Association (PBA) All-Filipino on a winning note.

Jason Perkins got the attack of Phoenix going in the opening quarter, towing his team to an early 8-2 lead.

The Fuel Masters used it as a springboard to go on and secure a 24-16 advantage after the first 12 minutes.

In the second quarter, TNT began to claw its way back, levelling the count at 28-all by the 6:44 mark.

The teams jostled after with Phoenix eventually managing to squeeze in a one-point cushion, 37-36, at the break.

Roger Pogoy got it going at the start of the third canto, accounting for eight of the team’s 11 points in the first four minutes to push his team to a 47-39 lead.

The Tropang Giga extended their advantage further to 54-42 by the midway point of the frame.

Phoenix tried to regain some ground but still found itself down, 67-61, heading into the final quarter.

But the Fuel Masters were unrelenting in its charge back, outscoring the Tropang Giga, 9-3, on the lead of RJ Jazul, to tie the score at 70-all with 9:27 remaining.

The game stayed tight after with the teams still knotted at 81-all at the 4:29 mark.

But Mr. Castro got the three points back when he drained a three-pointer with 1:14 left to give TNT more breathing space, 90-86.

Off a timeout, the Fuel Masters went once again to Mr. Abueva, who scored a deuce with 54 ticks left to make it a 90-88 affair.

Mr. Castro rose to the challenge anew, draining a basket in the paint to extend their lead back to four, 92-88, with 26 seconds remaining.

Phoenix sued for time after to set up a play.

Mr. Jazul pushed his team to within a point, 92-91, with a triple with 20 seconds left on the clock.

The Fuel Masters then fouled guard Simon Enciso off a TNT timeout.

Mr. Enciso split his charities to still open the door for Phoenix, 93-91, with 19 seconds to go.

Off the rebound, the Fuel Masters attacked the basket with Mr. Perkins getting fouled with seven seconds left.

Unfortunately, the Phoenix big man was not able to tie the count as he went 1-of-2 from the foul line, leaving his team still down by one, 93-92.

The Fuel Masters then fouled Mr. Castro, who coolly sank his free throws to make it a three-point lead for TNT, 95-91, with five ticks left.

Alex Mallari tried to tie the score for Phoenix but his desperation trey did not connect, preserving the win for TNT.

Mr. Castro top-scored for the Tropang Giga, finishing with 20 points, to go along with six rebounds and six assists.

For Phoenix, it was Mr. Jazul who showed the way with 21 markers.

The Fuel Masters played much of the contest without leading scorer Matthew Wright, who hurt his ankle in the first quarter.

Game Two of the semifinal series is on Friday at 6:30 p.m.