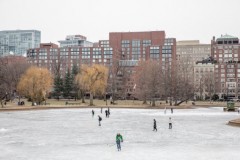 NEW YORK, United States (AFP) — Thousands of flights in the United States were canceled Saturday as parts of the East Coast braced for a shellacking by a powerful winter storm packing heavy snow and high winds. Places in the North East, including New York and Boston, were expected to bear the brunt of the far-reaching system, which is also predicted to pummel the Mid-Atlantic. Salt machines and snowplows were at the ready in […]