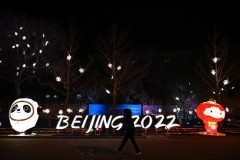 TAIPEI, Taiwan (AFP) — Taiwan will not send an official delegation to the opening or closing of the Beijing Winter Olympics due to China’s strict pandemic controls and flight disruptions, the self-ruled island’s governing body for sport said. The decision comes at a time when relations between Beijing and Taipei are at their lowest in decades with China ramping up military and economic pressure under President Xi Jinping. Taiwan’s Sports Administration said late Friday […]