Team Lakay adjusting to the call of the times 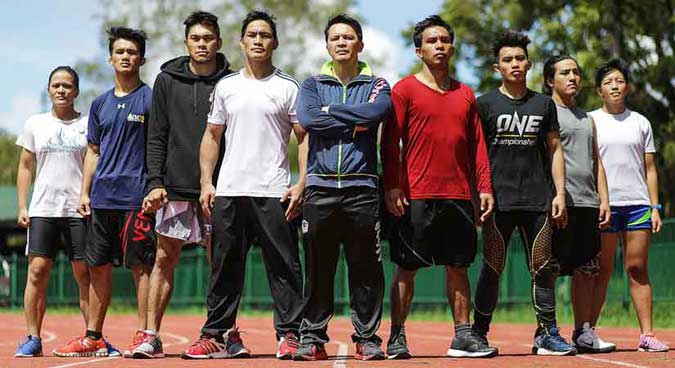 RECOGNIZING that ONE Championship is no longer the same promotion it saw when it first joined the group nearly a decade ago, Baguio-based Team Lakay is doing its best to adjust to the call of the times for its fighters to compete at a better footing.

With Asia’s largest media property becoming a prime destination now for some of the best fighters not only in the region but from different parts of the world who bring varying skills set, Team Lakay knows that its work has become tougher but shared that it has been shaping up to address it.

“As ONE undergoes changes, so do us at Team Lakay,” said team coach Mark Sangiao in an online interview session with local media on Monday.

“Our mission is to continue to level up our game to better compete in the promotion and not be left behind by the other countries,” he added.

Among the ways Team Lakay is going about it is adding more trainers to cover more bases, Mr. Sangiao said, as well as carefully scheduling their training so as to have less disruption.

“We have a classification of our athletes. We have elite athletes of the team, Class A, B, and C. We try to classify them and try to separate the training of those who have fights,” Mr. Sangiao said.

Since being part of ONE in 2012, Team Lakay has done well in the promotion, producing five champions to date.

Honorio “The Rock” Banario was the first ONE champion from Team Lakay, bagging the world featherweight title in 2013.

Following suit in 2016 was Eduard “Landslide” Folayang, taking home the world lightweight belt and winning it once again in 2018.

Currently, it is only Mr. Pacio who is a titleholder, but Team Lakay warriors remain contenders in different weight divisions.

“The fighters right now are beasts with tremendous skills. The level of competition is very high and we really have to stay at par with the field,” underscored Mr. Eustaquio, who joined Mr. Sangiao in the media availability.

Mr. Eustaquio won his last fight Friday at “ONE: Inside The Matrix III” in Singapore, beating South Korean Song Min Jong by unanimous decision. It was his second straight win.

Moving ahead, Mr. Sangiao assured that Team Lakay will continue to up its game and inspire and develop more talents to represent and bring pride to the country on the international stage.

“We would like to thank the fans and sponsors who are with us and have our backs. Just continue believing and praying for the team.” — Michael Angelo S. Murillo

MANILA, Philippines --- Senator Sherwin Gatchalian on Thursday urged the government to ensure interventions that would guarantee the safety of young girls in evacuation...
Read more
NEWS

Need a fast connection? No worries, Grab and Globe At Home Have Got You Covered!

Paying bills and purchasing necessities with the use of e-wallets have been a growing trend especially in a time where most people are still...
Read more
NEWS

- November 26, 2020 0
MANILA, Philippines --- Senator Sherwin Gatchalian on Thursday urged the government to ensure interventions that would guarantee the safety of young girls in evacuation...