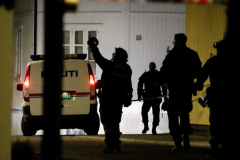 A man armed with a bow and arrows killed several people and wounded others in southeastern Norway on Wednesday, police said, adding they had arrested the suspect. “We can unfortunately confirm that there are several injured and also unfortunately several killed in this episode,” local police official Oyvind Aas told a news conference. “The man who committed this act has been arrested by the police and, according to our information, there is only one person […]