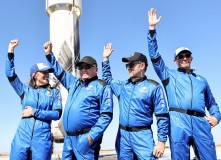 “Star Trek” actor William Shatner finally became a real space traveler on Blue Origin’s second crewed mission Wednesday, calling it the most profound experience of his life. “It was unbelievable,” said the 90-year-old Canadian, known to the sci-fi show’s legion of “Trekkies” as the daring Captain James T. Kirk, a role he first played more than half a century ago. He was joined on the 11-minute journey beyond Earth’s atmosphere and back again by […]