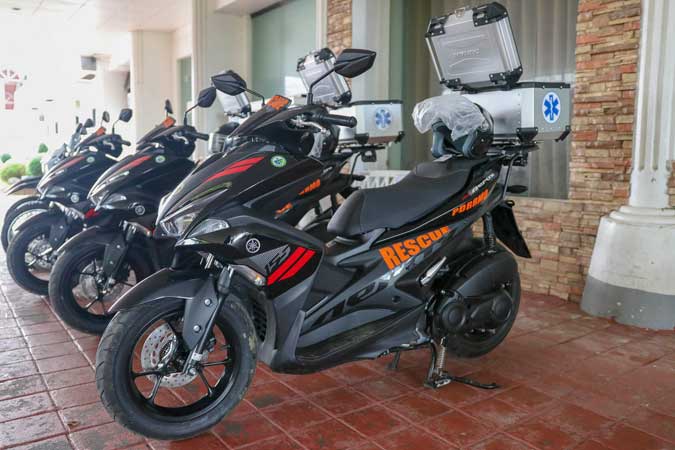 Occidental Mindoro has acquired motorbikes customized with a first-aid kit that will be used by quick response teams of the provincial disaster management office. “These Rescue Motorcycles… are intended to deliver immediate emergency treatment, especially in areas inaccessible to four-wheel vehicles,” Governor Eduardo B. Gadiaono said in a statement in Filipino posted on the provincial government’s Facebook page. The motorbikes will also be used during disaster response operations. Occidental Mindoro, located off the southwestern side of Luzon, was among the provinces inundated by the recent typhoons Quinta (international name: Molave) and Ulysses (Vamco).

THE Australian government has committed an additional P28.52 million for response measures on the devastation caused by Super Typhoon Rolly (international name: Goni) in the Bicol Region. “This commitment will contribute to the collective response from the humanitarian community in the Philippines and will directly assist 23,345 affected people including 2,990 women and girls including the pregnant and nursing mothers,” the Australian Embassy said in a statement on Wednesday. Australian Ambassador to the Philippines Steven J. Robinson said the support is “even more critical following Typhoon Ulysses (Vamco) that caused further hardship for the people in the Bicol Region.” In the immediate aftermath of Typhoon Rolly, which first made landfall on Nov. 1, Australia sent prepositioned humanitarian supplies through the Philippine Red Cross and the United National Population Fund worth about P6.48 million.

THE Bangsamoro Transition Authority (BTA) has formalized its support to the call for an extension of the regional government’s transition period by another three years to end in 2025. In a resolution adopted on Nov. 17, the BTA asked both chambers of Congress to pass a law extending the transition, which started in 2019 and is supposed to conclude by 2022, in time for the national and local elections. Member of Parliament (MP) Jose I. Lorena, one of the principal authors of the resolution, said the extension will give the BTA sufficient time to carry out its mandate and programs under the new Bangsamoro Autonomous Region in Muslim Mindanao (BARMM). Mr. Lorena, a former undersecretary at the Office of the Presidential Adviser on the Peace Process, noted in the resolution that the extension is not for the term of parliament members but the transition period. MP Mohagher Iqbal, also the region’s education minister, said the extension is crucial for ensuring the successful implementation of the normalization process under the peace agreement. “I beg to disagree, (with some) observation, that this is self-serving for our part… This is for our people,” Mr. Iqbal said. The resolution was passed during BTA’s regular session on Tuesday wherein Chief Minister Ahod Ebrahim also led the ceremonial signing of the Bangsamoro Administrative Code. “Just the other week we have inaugurated our blueprint for the future of the Bangsamoro, today, we are letting everyone know we have the very governance mechanism that will put into operation everything we have planned to undertake,” Bangsamoro Parliament Speaker  Pangalian M. Balindong said in his speech. — MSJ

ELECTRICITY has been restored in 300 cities and municipalities while 142 areas already have partial supply, and 31 are still awaiting the completion of repair works, according to the National Electrification Administration’s (NEA) report issued on Tuesday evening. Restoration works for the distribution lines of electric cooperatives have been ongoing in areas affected by Typhoon Ulysses (international name: Vamco). These include parts of the Cordillera Administrative Region, Ilocos, Cagayan Valley, Central Luzon, CALABARZON, and Bicol. NEA also said electric cooperatives in the flood-stricken province of Cagayan have so far fully restored distribution services to Tuguegarao City, the capital, and 21 of the 28 towns. — Angelica Y. Yang

THE DEPARTMENT of Agriculture (DA) launched a P2.5-million project in Rizal that aims to increase the supply of vegetables and other agricultural commodities to Metro Manila. Agriculture Secretary William D. Dar said the “Food Basket for Metro Manila” project that will be initially implemented in 110 hectares of rice and vegetables farm areas in the town of San Mateo. “This latest DA project will also cover other appropriate cities and municipalities in Rizal, including other nearby provinces in CALABARZON (Cavite, Laguna, Batangas, Rizal, and Quezon), surrounding Metro Manila,” Mr. Dar said. He added that San Mateo can later serve as a model production area for Metro Manila, where farm technologies can be introduced with focus on high-value products. DA-CALABARZON Regional Director Arnel V. de Mesa has been directed to immediately get the project rolling so that the first harvest will come in time for the December holidays. Meanwhile, Mr. Dar said that after the devastation brought by typhoons in major production areas across Luzon, farmers should focus on planting fast-harvesting crops on tillable lands. The DA also distributed P807,000 worth of agricultural interventions to typhoon affected farmers in San Mateo, including farm inputs and tools. — Revin Mikhael D. Ochave