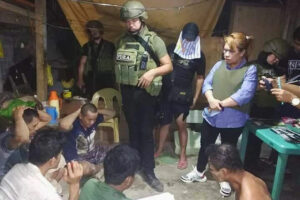 VICTIMS of the Philippine government’s war on drugs have yet to get justice despite the state’s claim that it has a functioning justice system, according to a human rights lawyer.

“There are many concerns and challenges on the judicial front about the war on drugs, which this government does acknowledge,” Maria Kristina C. Conti, secretary general of the National Union of People’s Lawyers and legal counsel for several victims of the drug war, said in an e-mail.

“A working judicial system in the Philippines, however hard we engage in it, has not translated into any relief, safety or justice for the victims.“

Ms. Conti said most cases of wrongful deaths in connection with the anti-illegal drug campaign involve low-level policemen and have been treated as isolated incidents.

The state “vigorously pursues its own investigation and prosecution of crimes committed in relation to the government’s so-called war on drugs, all within the framework of our own legal and judicial system,” the he told reporters in a Viber message on Sept. 27.

In a 21-page letter to the international tribunal’s pre-trial chamber, ICC Prosecutor Karim Ahmad A. Khan said the ICC has jurisdiction to probe the Philippines, contrary to the state’s claim.

Mr. Guevarra, ex-President Rodrigo R. Duterte’s Justice secretary, earlier told the court the alleged murders of drug suspects in police raids were not crimes against humanity because these were not “attacks against the civilian population.”

The prosecutor disagreed, saying the Philippines had not submitted concrete evidence to disprove the pre-trial chamber’s conclusion that extralegal killings during the campaign were part of a “widespread and systematic attack against a civilian population.”

“Denying that there is state or organizational policy in committing crimes against humanity is an argument that directly benefits any possible subject of an investigation,” said Ms. Conti, who is accredited by the ICC to practice law before the international tribunal.

She noted that if the government plans to respond to the ICC prosecutor’s plea, it should do so as soon possible.

The human rights lawyer said the international tribunal’s pre-trial chamber is not obliged to consider late submissions by the government.

Mr. Guevarra said his office was considering if it would reply to the prosecutor’s response to the government’s plea to block the ICC’s drug war probe. He noted that the court has yet to rule on the state’s plea.

The Department of Justice (DoJ) has brought five of the 52 cases involving 150 police officers to court since it started its own probe last year.

Mr. Remulla has said he wanted to extend the Witness Protection Program to officers who are willing to testify on extralegal killings under the Duterte administration’s anti-illegal drug campaign.

Ms. Conti said the DoJ should focus on collecting information on the drug war through victims or witnesses instead of police officers.

“The DoJ will have no cases to litigate if it depends on the Philippine National Police to submit and recommend cases, conveniently forgetting that the police themselves should be the very subject of a genuine investigation,” she said. “To date, there are only a handful of cases that have gone to court.”

The Hague-based tribunal, which tries people charged with crimes against humanity, genocide, war crimes and aggression, suspended its probe of Mr. Duterte’s deadly war on drugs last year upon the Philippine government’s request.

The ICC was also set to probe vigilante-style killings in Davao City when Mr. Duterte was still its vice mayor and mayor.

The United Nations Office of the Commissioner for Human Rights last month said the government’s probe of human rights violations in connection with its deadly drug war lacks transparency.

Mr. Duterte canceled Philippine membership in the ICC in 2018. President Ferdinand R. Marcos, Jr. has said the Philippines would not rejoin the international court.

Data from the Philippine government released in June 2021 showed at least 6,117 suspected drug dealers had been killed in police operations. Human rights groups estimate that as many as 30,000 suspects died.

“It is well within the Philippine government’s prerogative to engage with the International Criminal Court,” Ms. Conti said.

“We who have pursued cases together with victims and support groups have discerned unevenness and obstacles in prosecution.”

The Philippine Human Rights Commission has said the Duterte government had encouraged a culture of impunity by hindering independent inquiries and failing to prosecute erring cops.