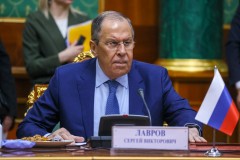 MOSCOW, Russia (AFP) — Russia’s Foreign Minister Sergei Lavrov on Friday said he doubted the motives of Ukraine’s intention of joining the European Union, while accusing Brussels of ambitions beyond the European continent. Ukraine, where Russia launched a military campaign on February 24, “is ready to declare a neutral, non-aligned status,” Lavrov told reporters following a meeting of CIS foreign ministers in Tajikistan’s capital Dushanbe. “At the same time, they are trying in every […]