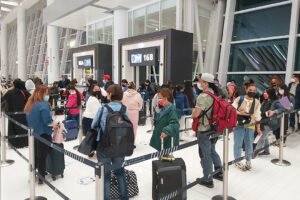 THE DEPARTMENT of Foreign Affairs (DFA), through its Office of the Undersecretary for Migrant Workers Affairs, repatriated over 7,000 overseas Filipinos this year, according to a statement released by the Office of the Press Secretary on Monday.

Of the 7,880 repatriated Filipinos as of end-November, more than half or 58% were from the Middle East, with 942 from Kuwait, and another 70 from Sri Lanka, based on DFA data.

“We will intensify this partnership to provide fast and competent services and assistance to overseas Filipinos who need help,” the Chief Executive told a Filipino community in Cambodia in Filipino on the sidelines of the 40th and 41st Association of Southeast Asian Nations (ASEAN) Summit in November.

There were about 1.83 million overseas Filipino workers as of 2021, higher than the 1.77 million estimate in 2020, based on data from the Philippine Statistics Authority released on Dec. 2.

Those with existing work contracts comprised 96.4% or 1.76 million of the 2021 total. The rest were Filipinos working abroad under a tourist, visitor, student, medical, and other types of non-immigrant visas.

Remittances by overseas Filipino workers reached $2.91 billion in October, higher than the $2.81 billion in the same month last year, based on data from the Bangko Sentral ng Pilipinas released on Dec. 15.

The amount of money sent home by migrant workers was the highest in three months or since the $2.92 billion in July.

Mr. Marcos had on several occasions described overseas Filipino workers as the pride of the Philippines as they “bring honor to the Filipino nation.”

“You provided a much-needed boost to the pandemic-stricken economy… allowing us to fund social programs that help the poor and the most vulnerable families in the Philippines,” he said.

Meanwhile, the DFA also said in its yearend report that it issued a total of 3,589,620 passports from January to October.

As of November, the department has also issued 55,574 visas and 551,635 apostille certificates.