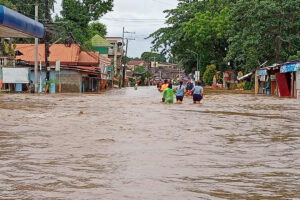 AT LEAST six people died and 19 others were reported missing as heavy and incessant rains triggered landslides and flooding in several parts of central and southern Philippines during the Christmas weekend, authorities reported on Monday.

More than 44,000 people across the regions of Mimaropa, Bicol, Eastern Visayas, Zamboanga Peninsula, and Northern Mindanao were evacuated on Dec. 25, and emergency response teams remained on alert Monday as continued rains were expected based on the forecast of state weather agency PAGASA.

Among the confirmed deaths were in Oroquieta City, Misamis Occidental due to a landslide, according to a report from the provincial police office.

Among those missing were three fishermen in Catanduanes, who failed to return home on Christmas eve after going out to sea, according to the Philippine Coast Guard.

The Coast Guard said search and rescue operations were still ongoing Monday with the help of local fishermen.

In an 11 a.m. bulletin Monday,  the National Disaster Risk Reduction and Management Council (NDRRMC) said over 23,000 families were affected by flooding, composed of 100,691 people.

Northern Mindanao — composed of the provinces of Misamis Oriental, Misamis Occidental, Bukidnon, Lanao del Norte and Camiguin, including the independent city of Cagayan de Oro —  accounted for majority of those affected.

The Department of Social Welfare and Development’s office in Northern Mindanao said in an 8 a.m. report on Monday that 45,883 people in the region have been evacuated.

The Zamboanga City government tallied 433 families affected by flashfloods and one person missing.

SHEAR LINE
State-run Philippine Atmospheric, Geophysical, and Astronomical Services Administration (PAGASA) said in a weather advisory Monday that the regions of Eastern Visayas, Caraga, and Northern Mindanao along with the provinces of Bohol and Davao Oriental will likely experience moderate to heavy rains in the next 24 hours.

The rains are caused by a shear line, which occurs when there are  abrupt changes in wind component and easterly winds and the northern cold front interact.

PAGASA Weather Forecaster Patrick Del Mundo, in an interview with One Balita Pilipinas on Monday, said that moderate to heavy rains in the Visayas and Mindanao will continue until December 28 due to a shear line.

“We will have a sufficient number of officers from the reserve standby force in the Eastern Visayas who can respond to our countrymen affected in the region,” she said in Filipino.