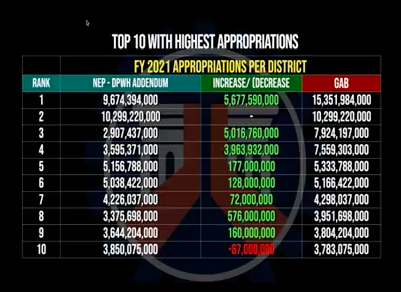 MANILA, Philippines — Sen. Panfilo Lacson bared “huge” infrastructure allocations for congressional districts under the 2021 budget, with allocations for 220 districts amounting to over P1 billion, the highest of which is P15.3 billion.

Lacson made the disclosure during the Senate plenary debates on the budget of the Department of Public Works and Highways (DPWH) early Thursday.

“According to our sources, they [House legislators] have a hand in the preparation of this list. So I’m not blaming the department when it appears this way. Because practically, congressmen were the ones who made this list,” the senator said.

The senator presented a list that showed how allocations for…