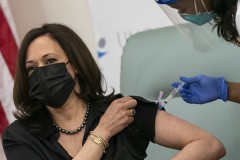 WASHINGTON, United States (AFP) — US Vice President-elect Kamala Harris received her Covid vaccine live on television Tuesday and urged public trust in the process, while her choice of hospital highlighted the plight of the hard-hit African-American community. A mask-wearing Harris received the first of her two shots at United Medical Center, located in an area of Washington, DC with a large African-American population. African-American communities nationwide have seen disproportionately high levels of death and […]