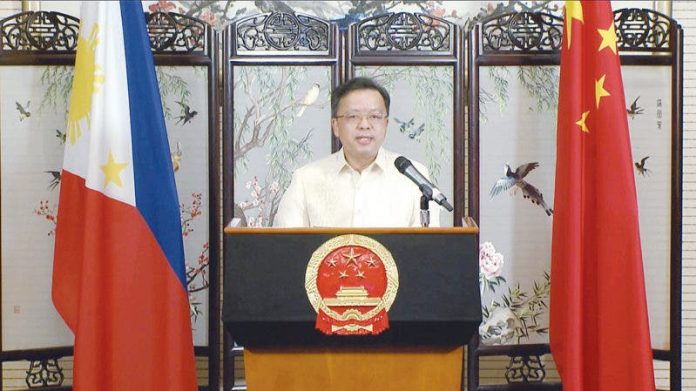 THE Chinese Embassy in Manila hosted an online Christmas gathering for recipients of the Chinese Ambassador Scholarship Program from the University of the Philippines and the Philippine Normal University.

The advance celebration last November 18 was for 40 faculty members and students from both universities.

In his welcoming remarks, Chinese Ambassador to the Philippines Huang Xilian congratulated the scholars for their excellent performance and achievements and expressed his appreciation to the teachers “for their unyielding efforts and support.”

The Chinese envoy highlighted that China and the Philippines are both long-time friends and neighbors, partners and relatives, and, today, many Filipinos have Chinese blood in their veins.

This year marks the 45th anniversary of the establishment of the diplomatic relations between China and the Philippines.

Under the guidance of President Xi Jinping and President Rodrigo Duterte, China-Philippines relations have ushered in a New Golden Age.

“This year, our two countries have been fighting the pandemic hand-in-hand, which is another vivid illustration of the brotherly friendship between the two countries. Looking ahead, China-Philippines relations enjoy [a] bright future and broad prospects.” Ambassador Huang said.

Ambassador Huang said he always believes that the Philippines’ future will be “deeply rooted in its own national development, in a stable and amicable neighborhood, and in a peaceful and prosperous Asian region, and  at the end of the day lies with the generation of youth.”

He said he was sure that the youth will always stand on the right side of history and make positive contributions to the world and the well-being of mankind.

Together with the students were Chancellor of UP Diliman, Dr. Fidel Nemenzo, and President of PNU, Dr. Bert Tuga, who expressed their gratitude to the Chinese Ambassador in their remarks.

Jerica Malliah Fonacier, a third-year student from UP, said she felt “fortunate to have been selected as the recipient of this honor.”

“Your generosity will allow me and my fellow students to pursue our dreams and for that I cannot thank you enough,” said Fonacier.

Harold Bumanglag of PNU said the scholarship program has ingrained the “values of mutual respect, understanding and cooperation that open an avenue to promote common good, social responsibility and innovative thinking.”

The Chinese Ambassador Scholarship was launched in September 2014 at UP and PNU to help poor students pursue their studies. So far, more than 300 students from both universities have benefited from the scholarship.