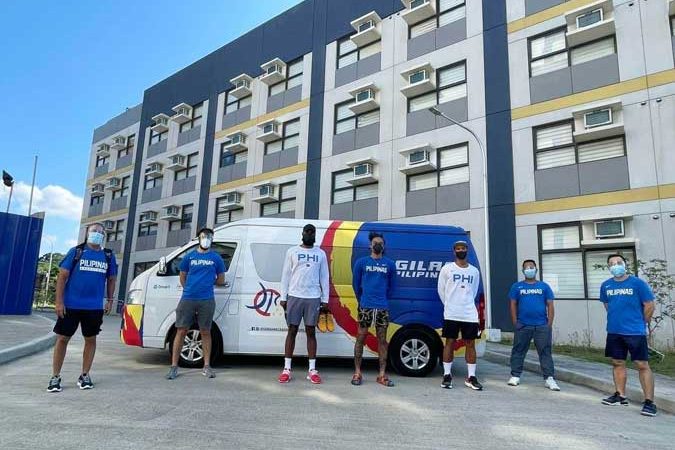 GILAS Pilipinas 3×3 team’s busy journey to the FIBA Olympic Qualifying Tournament (OQT) has begun after it entered its training “bubble” at the weekend at the INSPIRE Sports Academy in Calamba, Laguna.

For at least eight days, the three-a-side national team, composed of the country’s top players in the sport and Philippine Basketball Association (PBA) stalwarts, will try to work on their collective game for their OQT campaign happening from May 26 to 30 in Graz, Austria.

In the qualifiers, the nationals will try to notch one of the three tickets up for grabs for the Tokyo Olympics, where 3×3 basketball will make its debut.

The team said much work lies ahead for it since the pandemic greatly affected its preparation but it remains optimistic, banking on the members’ similar mind-set of doing well in the competition.

“We all have the same goals of making it to the Olympics. Once we’re on the court, we know what is expected of us and we’re going to do everything we can for the team and the country,” said incoming PBA rookie Alvin Pasaol of the Meralco Bolts in Filipino during their session on the radio program Power & Play on Saturday.

Mr. Pasaol and fellow rookies Joshua Munzon (Terrafirma) and Santi Santillan (Rain or Shine) are among the top 3×3 players in the country and played a big role in the Philippines securing a spot in the OQT, being part of teams which saw action and gained qualifying points in various International Basketball Federation (FIBA) tournaments.

They now aim to take what they have built to another level in the OQT, along with teammates CJ Perez and Mo Tautuaa of San Miguel, who are members of the gold medal-winning team in the 2019 Southeast Asian Games.

While no longer strangers to one another, having had a chance to practice and train together right before the pandemic hit last year, still the 3×3 team members admit they have their work cut out at INSPIRE as they prepare a game plan to what is expected to be a tough OQT campaign.

“Most of the teams seeing action in the OQT have been playing for a long time now so we have a lot of room to make up for,” said Mr. Dehesa.

Mr. Munzon, for his part, said they will use the time given to them for training to get their feel for one another on the court and perfect the chemistry needed.

“It may take a little adjustment at first for some of us, but it is about the team and going for our goal,” the country’s top 3×3 player said.

While initially pegged to last for eight days, the Samahang Basketbol ng Pilipinas (SBP) is looking to extend the Ronnie Magsanoc-coached 3×3 team’s training for several days more if conditions permit before it flies out to the OQT.

OQT format calls for each team playing the other four in their respective pools. The top two teams from each pool qualify for the crossover quarterfinals and then play knockout games all the way to the semifinals.

The semifinals and the third-place games will be known in the FIBA 3×3 OQT as the Olympic Ticket games.

It will take a break the following day before resuming its campaign on May 28 against the Dominican Republic at 6 p.m. and France at 8 p.m.

If Gilas Pilipinas 3×3 succeeds in booking a spot in the Tokyo Games, it will become the first basketball squad from the Philippines to qualify for the Olympics since the 5-on-5 team which featured the likes of Bogs Adornado, Jimmy Mariano and Freddie Webb in 1972 in Munich, Germany. — Michael Angelo S. Murillo