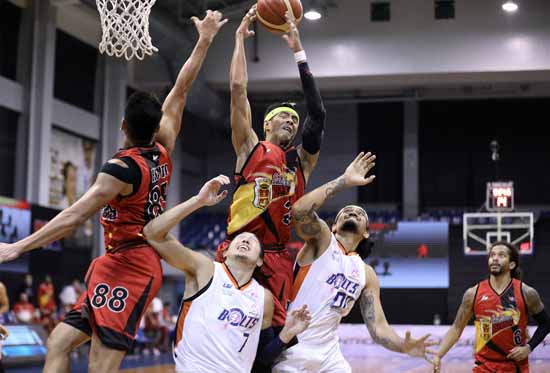 The San Miguel Beermen’s quest for a historic sixth consecutive PBA Philippine Cup crown is on the line as they face the marauding Meralco Bolts in the do-or-die quarterfinals today, November 15, at the Angeles University Foundation (AUF) Sports and Cultural Center in Angeles, Pampanga.

The fifth-seeded Bolts nullified the fourth-seeded Beermen’s twice-to-beat advantage with a 78-71 win on Friday, extending the series to a deciding game two.

The Bolts made their first appearance in the Philippine Cup playoffs after five years by defying the more experienced Beermen, who have held the All-Filipino title since 2014.

“The guys played with a lot of heart out there. They just played hard,” he said after Game 1. “We didn’t shoot well, but our defense held up.”

Meralco’s defense limited Tautuaa’s output to 14 points and Santos to only 8 points. Tautuaa and Santos hold an average of 18.9 points and 13 points, respectively.

“It’s halftime. We haven’t achieved anything yet. We still need to win one more game,” said Black.

Injury haunts the Beermen anew as veteran point guard Alex Cabagnot skipped Game 1 due to a strained hamstring. San Miguel is hoping for Cabagnot’s return in time for the sudden-death game to reinforce his fellow veterans Santos, Chris Ross and Marcio Lassiter.

The 37-year-old Cabagnot is a valued asset, registering an average of 13.1 points, 3.8 rebounds and 3.7 assists in the elimination, not to mention his leadership and unprecedented court vision.

The winner between San Miguel and Meralco will face the top-seeded Barangay Ginebra Gin Kings, who booted out the Rain or Shine Elasto Painters, 81-73, on Friday night.