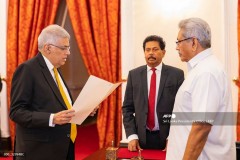 by Amal JAYASINGHE and Sean GLEESON Sri Lanka’s new prime minister struggled Friday to forge a unity government and forestall an imminent economic collapse as opposition lawmakers refused to join his cabinet and demanded fresh elections. Ranil Wickremesinghe was sworn in late Thursday to navigate his country through the worst downturn in its history as an independent nation, with months of shortages and blackouts inflaming public anger. The 73-year-old insists he has enough support to govern […]