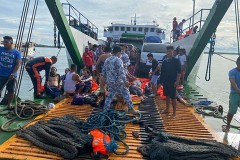 MANILA, Philippines (AFP) — At least seven people were killed and scores plucked to safety in the Philippines Monday after a fire ripped through a ferry and forced passengers to jump overboard, coast guard and witnesses said. The blaze broke out on the Mercraft 2 at around 6:30 am (2230 GMT Sunday) as it carried 134 passengers and crew from Polillo Island to Real in Quezon province on the main island of Luzon. Seven people […]