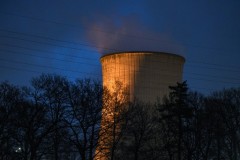 FRANKFURT, Germany (AFP) — Germany should extend the lifetime of its nuclear plants to avoid an “extreme scenario” in which a Russian gas stop could wipe 12 percent off the economy, a government advisor said Thursday. Prolonging the operational lifetime of Germany’s remaining reactors could “create some breathing space”, Veronika Grimm, a member of the government’s council of economic advisors, told the Funke media group. Germany turned its back on nuclear energy following the […]