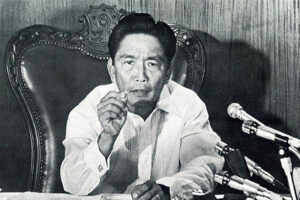 OFFICIAL GAZETTE OF THE REPUBLIC OF THE PHILIPPINES

FILIPINOS should resist attempts to revise history and “sanitize” literature and the arts, a lawmaker said on Wednesday, as the Philippines marked the 50th anniversary of the late dictator Ferdinand E. Marcos’ martial law rule.

“Lamentably, the sins of the dictatorship — the grievous human rights violations, unrestrained cronyism, the plunder of the economy and negative economic growth — are barely taught in educational institutions,” Albay Rep. Edcel C. Lagman said in a privilege speech.

This is despite a law that sought to compensate thousands of victims and mandates education agencies to ensure these atrocities were taught at all school levels, he said.

Mr. Lagman said the advent of troll farms distort the facts learned by the youth about the dictator.

“The widespread proliferation of disinformation and historical distortion paved the way to historical amnesia of the atrocities that occurred during the martial law regime of the late dictator,” Party-list Rep. France L. Castro said in a separate statement.

“This is why it is very important to bring back Philippine History as a separate subject in high school to ensure that the Filipino people do not forget the lessons of the past.”

On Sept. 23, 1972, Mr. Marcos announced on national television that he had placed the Philippines under Martial Law, citing an alleged communist threat.

Proclamation 1081, which was dated two days earlier, abolished Congress and allowed him to consolidate power by extending his term beyond the two allowed by the 1935 constitution.

More than 70,000 people were jailed, about 34,000 were tortured and more than 3,000 people died under martial rule, according to Amnesty International.

“Fifty years constitutes a golden jubilee, a celebration of life for half-a-century, but for the imposition of martial law on Sept. 21, 1972, five decades recalls years of infamy, repression, corruption and economic despoliation,” Mr. Lagman said.

“We will never forget the thousands murdered and imprisoned under the Marcos dictatorship,” Party-list Rep. Arlene D. Brosas said in support of Mr. Lagman.

“The youth of today will not forget and continue to study the lessons that have been imparted to us by past generations who fought for democracy in our country,” Party-list Rep. Raoul Danniel A. Manuel said.

Human rights advocates, academics, historians and artists gathered at a national monument near Manila, the capital built to honor victims of military rule.

Among those who commemorated the event was 19-year-old student Karl Patrick Wilfred M. Suyat, who co-founded a network of volunteers committed to preserving the country’s history about the Marcos regime.

“The election of Ferdinand R. Marcos, Jr. prompted us to start the network, because of our conviction that this government will anytime soon go after the archives to seal the Marcoses’ historical denialism,” he said in a Facebook Messenger chat. “We do not want to wait until they’ve actually extirpated the archives before we act.”

The youth-led network called Project Gunita (Memory) archives reading materials such as news articles, magazines and journals about the dictatorship, which plunged the Philippines into decades of unrest and economic collapse.

The materials collected by the team are being digitized.

Mr. Suyat said he was not surprised by the Marcos government’s silence on the martial law anniversary, which previous administrations had commemorated in the past.

“No amount of historical whitewashing from their end will push people to simply forget,” he said. “Any statement from them would be incriminating.”

Ordinary Filipinos and civil society should educate the public about the Marcos dictatorship and demand that the state preserves its memory, Maria Ela L. Atienza, who teaches political science at the University of the Philippines (UP), said in a Viber message.

“It is up to citizens to press institutions and people in authority to be accountable and work towards preserving history and evidence so that present and future generations will not forget the lessons of martial law and not repeat them,” she added.

President Ferdinand R. Marcos, Jr., the late dictator’s son, had not issued a statement about the event.

“The government’s silence is expected,” Michael D. Pante, who teaches history at the Ateneo De Manila University, said in a Messenger chat. “I don’t think the current administration would try to act in an openly hostile manner toward the various activities commemorating martial law.”

Senators clashed over how the nation should commemorate it.

“Let’s move on,” Senator Jose “Jinggoy” P. Estrada, who ran under Mr. Marcos’ ticket in the May 9 elections, told a news briefing.

But minority Senators Aquilino Martin “Koko” D. Pimentel III and Ana Theresia Hontiveros-Baraquel said moving on requires justice. “The [victims], if they are still alive, they all deserve at least an explanation as to what happened,” said Mr. Pimentel, whose father fought the dictatorship decades ago.

“It is not enough that we remember,” Ms. Hontiveros said. “We expect efforts and online trolling to undermine the significance of this day. It is then the duty of each and every Filipino citizen to deny them their goals.”

The Marcoses have been accused of living lavishly in the presidential palace while Filipinos suffered from a collapsing economy, which declined by 7.3% in 1984 and 1985.

Debt under the leadership of the elder Marcos ballooned to $20 billion in 1980 from $2 billion in 1972, when martial law was declared. The Marcoses are estimated to have amassed wealth of $10 billion (P579 billion), according to government estimates.

Meanwhile, support group Kapatid urged the government to release political prisoners who suffer in jail on trumped up charges.

A popular street uprising toppled the dictator’s regime in February 1986, forcing him and his family to flee into exile in the United States.

Kapatid said there were more than 800 political prisoners as of Sept. 20.

“As time can make memories vulnerable, we call on every Filipino to protect our history and the truth captured in the country’s collective experience during the 1972 martial law as an important facet of achieving transitional justice,” the Commission on Human Rights said in a statement. — Matthew Carl L. Montecillo, Kyle Aristophere T. Atienza and John Victor D. Ordoñez