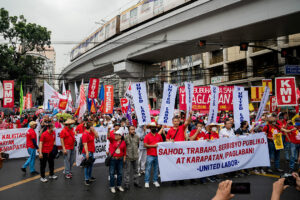 A SENATOR on Wednesday urged the government to develop a comprehensive labor and compensation plan, backing workers and activists who held a rally on Wednesday to push for better wages as the Philippines commemorated the birth anniversary of revolutionary hero Andres Bonifacio.

President Ferdinand R. Marcos, Jr., meanwhile, hailed workers as the country’s “modern-day heroes” as he called for patriotism as exemplified by Bonifacio.

“Together let us face the challenges of the times with love for country, determination, courage, and honor so we can build a Philippines that we can be proud of,” Mr. Marcos said in his speech in Filipino at the commemoration ceremony at the Bonifacio Monument in Caloocan City.

On the other hand, Senator Ana Theresia N. Hontiveros-Baraquel said the state should create programs that guarantee adequate income and employment in “volatile” economic conditions.

“I think it is an urgent matter that we heed the calls of labor groups,” she said in a statement. “The pandemic’s effect on our economy has been extraordinary.”

The lawmaker backed the proposed initiatives of labor group Nagkaisa, which called for reforming the country’s region-based wage-setting procedures, addressing issues of contractual workers, and developing a public employment program.

“Their proposals are vital to understanding the most pressing issues of our economy, even the everyday problems of Filipino families,” Ms. Hontiveros said.

LABOR, RIGHTS GROUPS
Nagkaisa was among the groups that joined Wednesday’s demonstration in Manila. Protest rallies were also held in other main cities of the country.

“Contractualization, both in the private and public sector, significantly weakens the exercise of other labor rights such as freedom of association and collective bargaining, thus, keeping the life of ‘endo’ workers to the barest minimum,” labor group Sentro Secretary General Josua Mata said in a separate statement.

Federation of Free Workers Vice-President Julius H. Cainglet earlier told BusinessWorld in a telephone call that workers need higher wages to cope with the rising prices of food and utilities.

Rights group Karapatan, in a statement, said Bonifacio’s 159th birth anniversary “should be taken as an opportunity to re-learn and live out our people’s history.”

“At present, the poor majority face greater challenges and struggles amidst high prices of basic commodities and poverty,” Karapatan said.

“Peasants remain landless and are unable to afford expensive farm inputs without sufficient support and subsidy from the government… Workers are slaves of their meager wages and without social protection, while millions are forced to work outside the country,” it added.

Headline inflation increased to 7.7% in October from 6.9% in September, the quickest increase in nearly 14 years, according to the Philippine Statistics Authority.

The Philippines’ jobless rate dropped to 5% in September, a new low since the start of the pandemic. This translates to 2.5 unemployed Filipinos. However, job quality worsened in the same month as Filipinos seeking more work rose to a six-month high of 15.4% or 7.33 underemployed Filipinos.

“Our labor groups are hoping for direct dialogues with the current administration and we should listen to their pleas,” Ms. Hontiveros said in Filipino. — John Victor D. Ordoñez and Kyle Aristophere T. Atienza