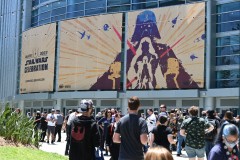 by Andrew Marszal © Agence France-Presse  Anaheim, UNITED STATES (AFP) — Disney announced a new live-action “Star Wars” series featuring Jude Law at a major fan convention Thursday — but any mention of upcoming films in the beloved sci-fi franchise was conspicuously absent, as the company focuses on its streaming service. Harrison Ford and Ewan McGregor were among the stars who appeared on stage before a raucous and outlandishly dressed crowd in Anaheim, California for […]