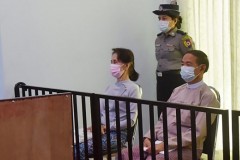 YANGON, Myanmar (AFP) — Ousted Myanmar leader Aung San Suu Kyi has been moved from house arrest to solitary confinement in a prison compound in the military-built capital Naypyidaw, a junta spokesman said on Thursday. Since her ouster in a coup last year, Suu Kyi had been under house arrest at an undisclosed location in Naypyidaw, accompanied by several domestic staff and her dog, according to sources with knowledge of the matter. The Nobel […]