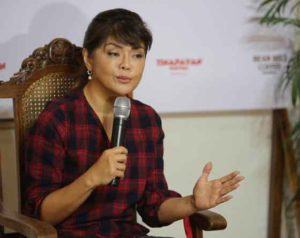 SEN. Maria Imelda Josefa Marcos wants the government to explain why it will pay “more than double” what rich countries have negotiated to buy the same vaccine for coronavirus disease 2019 (Covid-19).

Marcos noted that the Inter-Agency Task Force for the Management of Emerging Infectious Diseases (IATF-EID) expects to sign an agreement with AstraZeneca to buy 30 million doses of its vaccine at $5 or about P240 per dose, as soon as the United Kingdom’s health ministry authorizes its use.

She said Belgium’s budget secretary Eva De Bleeker had disclosed that European Union (EU) members would be buying the AstraZeneca vaccine for only 1.78 euro or about P105 per dose, which is 2.3 times less than what the Philippines will be paying the British-Swedish pharmaceutical firm.

“The purchase price doesn’t match the promise sold. Why has the government agreed to be shortchanged?” Marcos said in a statement on Monday.

She cited statements by AstraZeneca’s Chief Executive Officer Pascal Soriot and its research partner Oxford University “to provide the vaccine on a not-for-profit basis for the duration of the pandemic across the world, and in perpetuity to low- and middle-income countries.”

“At $5 per dose, 30 million doses will cost the Philippine government $150 million or almost P7.2 billion, which could buy more than 69 million doses for the EU,” Marcos said.

“With two doses required, 15 million Filipinos can be vaccinated at the same cost that can cover about 34.5 million Europeans,” the chairman of the Senate Committee on Economic Affairs pointed out.

Marcos also said that the United States will be buying the AstraZeneca vaccine at $4 per dose, at which rate five Americans can be immunized for every four Filipinos.

“The pricing issue must be addressed by the IATF, lest the government be suspected of profiteering amid tight funding for vaccines,” she said.

She proposed that the Asean (Association of Southeast Asian Nations) lobby global pharmaceutical firms to waive their intellectual property rights on vaccine patents, so that vaccines can be produced locally and sold at a cheaper price in poorer countries.

Quarantines, low vaccine procurement could slow rebound It would take the Philippine economy longer than its Southeast Asian peers to return to its pre-coronavirus crisis...
Read more
LOCAL NEWS

The government announced on Tuesday that the Philippines was now free of the H5N6 strain of the avian influenza that struck a few poultry...
Read more

- January 25, 2021 0
MAPUTO, Mozambique (AFP) — A tropical cyclone that hit central Mozambique on the weekend has displaced thousands of people and caused severe flooding in...