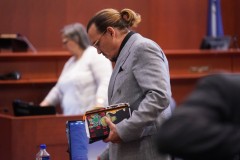 by Chris Lefkow Agence France Presse WASHINGTON, United States (AFP) — Johnny Depp was jealous, controlling and frequently drunk, and once threw a wine bottle in his hotel room in Las Vegas, his former girlfriend, the actress Ellen Barkin, said in pre-recorded testimony Thursday. Barkin, 68, testifying as a witness in the defamation suit filed by Depp against his ex-wife Amber Heard, said she had a brief “sexual relationship” with Depp in the 1990s. […]