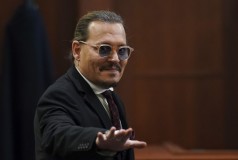 Washington, UNITED STATES (AFP) — Johnny Depp grabbed his then-wife Amber Heard by the hair and repeatedly struck her in the face during a heated argument about a month after their marriage, her sister said Wednesday. Heard also punched Depp during the March 2015 fight at their Los Angeles penthouse, Whitney Henriquez testified at the high-profile defamation case between the celebrity couple. Henriquez, Heard’s 34-year-old younger sister, said the “Pirates of the Caribbean” star sought […]