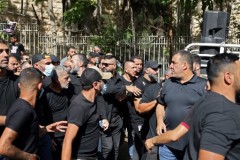 BEIRUT, Lebanon (AFP) — Gunfire killed six people and wounded 30 at a Beirut rally organised by the Shiite Hezbollah and Amal movements Thursday to demand the dismissal of the lead investigator into last year’s port blast. Interior Minister Bassam Mawlawi told a press conference that the death toll had climbed to six. He said that some of the victims where shot in the head. The deaths include a 24-year-old woman who was hit in […]