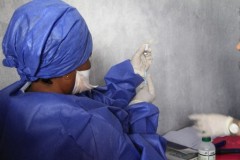 BENI, DR Congo (AFP) — Vaccination against the deadly Ebola disease began on Wednesday in the Democratic Republic of Congo’s eastern city of Beni, the WHO said, five days after reports of a new case. The fresh case was reported in North Kivu, the same province where the vaccination program began. “People at high risk, including contacts of the confirmed case and first responders will receive the doses as the health authorities move to curb […]