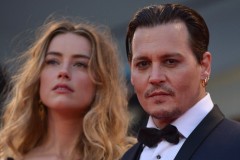 FAIRFAX, United States (AFP) — A US jury Wednesday found both Johnny Depp and his ex-wife Amber Heard liable for defamation — but sided more strongly with the “Pirates of the Caribbean” star following an intense trial riding on bitterly contested allegations of domestic abuse. The verdict capped a bitterly-fought six-week trial riding on lurid claims and counterclaims of between the Hollywood celebrities. The seven-member jury in Virginia awarded the 58-year-old actor $15 million […]