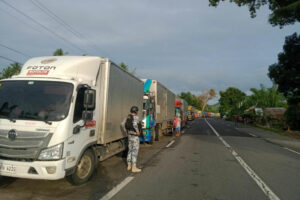 A LONG line of cargo and passenger vehicles was building up outside the Matnog Port in southern Luzon on Monday as roll on-roll-off vessels were being delayed by rough seas, the Philippine Coast Guard (PCG) reported.

“Vehicular traffic was slowing down as strong winds and high waves were affecting maritime operations,” the PCG said in Filipino in posts on its social media pages.

Matnog Port in Sorsogon is the jump-off point for cargo and passenger vehicles traveling from Luzon to Visayas and Mindanao, the central and southern parts of the country.

The port serves as a key link for the movement of people and goods across the country.

As of Dec. 26, the Coast Guard said there were no closed ports or stranded passengers despite incessant rains in many areas.

“The PCG has placed its districts, stations, and sub-stations on ‘heightened alert’ to manage the influx of port passengers during the Yuletide Season from 15 Dec. 2022 to 07 January 2023,” the agency said. — MSJ