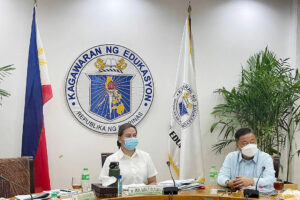 BUDGET experts support a senator’s earlier pitch for the re-alignment of so-called “confidential funds” of the Office of the Vice President (OVP) at P500 million and the Department of Education (DepEd) at P150 million under the proposed 2023 National Expenditure Program.

“We support the realignment of confidential funds which are not germane to the work of government offices and departments in previous administrations,” Terry L. Ridon, a public investment analyst and convenor of think tank InfraWatch PH, told BusinessWorld in a Viber message.

“Massive amounts of confidential funding should not be the norm in government, as it does not have the same transparency mechanisms as ordinary budget items,” he added. “More importantly, given our limited fiscal space, every peso of funding for specific public services counts, and confidential funds tucked in specific offices does not serve this end.”

Senate Minority Leader Aquilino Martin “Koko” L. Pimentel III, in a budget hearing last week, questioned the need for such “huge funding” under both offices, noting that confidential and intelligence funds are “prone to abuse and discretion.”

Vice President Sara Z. Duterte-Carpio, also the Education secretary, defended during the hearing that “The success of the programs, activities and projects depends on very good intelligence (report) and surveillance because you want to target specific issues and challenges.”

Confidential funds for DepEd, she said, will be used to combat sexual abuse, criminal recruitment of youths, and drug addiction among students, among others. As for the OVP, she noted that confidential and intelligence funds are not new.

The budget proposal for both offices were approved by the Senate committee.

Mr. Pimentel, however, said they will still “attempt to amend” the proposal before final approval from Congress.

I-Lead Executive Director Zyza Nadine M. Suzara said it was unlikely that these funds’ amounts would be realigned to other offices and more crucial projects.

“It is quite unlikely because of the traditional courtesy accorded to the president and the vice-president more so in this case where the administration commands a great majority in both Houses of Congress. Politics will again very likely trump the need to allocate budgets for more people-centered programs,” she said in a Viber message to BusinessWorld.

Mr. Ridon suggested that DepEd’s confidential funds be used for its Special Education program while that of the OVP can be used for satellite offices and frontline public services. — Alyssa Nicole O. Tan