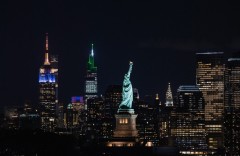 NEW YORK, United States (AFP) — The state of New York has confirmed five cases of the coronavirus Omicron variant, Governor Kathy Hochul said Thursday, bringing the total number of US detections of the new strain to eight. “New York State has confirmed five cases of the omicron variant,” Hochul said in a Twitter post aimed at reassuring residents of the nation’s fourth most populous state that the detections were not unexpected. “Let me be […]