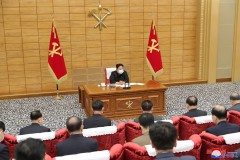 North Korea on Saturday reported 21 additional deaths from ‘fever’, two days after the country announced its first-ever cases of Covid-19 and ordered nationwide lockdowns. State media said 174,440 new fever cases were discovered on Friday alone and that 21 people had died, as it moved into “maximum emergency quarantine system” in a bid to slow the spread of disease through its unvaccinated population. “On May 13, 174,440 new cases of fever were reported […]